Here is a brief post on a new Icon representing Christ’s concern for animal suffering. It is on the basis of the arguments laid out in my PhD and forthcoming book that led me to instigate discussions with one of the United Kingdom’s most experienced iconographers Aidan Hart.[1] Our collaboration on this theme has led to the creation of a beautiful triptych entitled Christ Breaking the Bonds of Animal Suffering. 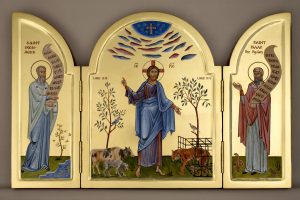 I also asked Aidan to write a brief explanation of the meaning behind some of the symbols in the Icon:

The icon suggests Paradise by the inclusion of trees, sea, grass, bees, birds, fish, snake and lizard, all of which look healthy. These creatures, and Saints Irenaeus and Isaac, face Christ, acknowledging Him as their Creator and Sustainer. One of the bees flies towards Him. This attitude of praise lies at the heart of Edenic life, just as ingratitude lies at the heart of the hellish life… This triptych shows Christ in the midst of creation, like a second Adam in paradise. He blesses with it His right hand, and directs it with His left.  He is a prophet, priest and king of creation.

In our discussions I expressed the desire for the icon to depict different aspects of animal suffering in the contemporary world whilst ensuring that it was grounded in both Eastern Orthodox theology and in the Patristic teachings of Luke 13:15 and 14:5.[2] I gave Aidan some ideas on how Christ might be depicted surrounded by a variety of animals, some emaciated, emerging from cages with broken doors, whilst others would be shown with broken chains, thus symbolising the breaking of the bonds of death and power of Satan. Aidan beautifully captures this brief in the center panel and explains that the icon:

...shows Christ blessing and liberating them, the tiger and chicken from their cages and the dog from its chains. Christ has come to set not just humanity free, but all creation. [3]

Cruelty to animals not only causes physical suffering to the victims but also introduces a tragic dissonance to this cosmic hymn. Such behaviour is therefore a sin not only against the animals, for it is also a failure of us humans to be conductors of the Eucharistic choir.

Aidan also explains that the image doubles as an image of Christ’s second coming:

Rome is home to numerous apse mosaics dating from the first millennium. Some of them show Christ in the midst of brightly coloured clouds. Examples are found in the churches of Santa Cecilia in Trastevere, Santi Cosma e Damiano, Santa Constanza, Santa Prassede, and Santa Maria Trastevere.  What do these clouds represent? They are clouds of a sunrise, and thus indicate Christ’s Second Coming in glory:

…then will appear the sign of the Son of man in heaven, and then all the tribes of the earth will mourn, and they will see the Son of man coming on the clouds of heaven with power and great glory… (Matthew 24:30)

Most of these apses also bear a cross at the apex. This is the “sign of the Son of Man” that will appear in the skies at Christ’s coming, a sign traditionally understood by the Orthodox Church to be the cross.  The stars that surround our cross in the triptych represent the host of heavenly angels that will accompany Him.

On either side of Christ are Saints Irenaeus of Lyon and Isaac the Syrian who are depicted holding scrolls of texts which refer to two of their important teachings for this theme. On the left panel we have one text from St Irenaeus (Against Heresies 2:2:5) which reminds us, should we forget: ‘Now, among the “all things” our world must be embraced.’ It is as a result of our failure to remember this teaching and others like it, that has resulted in our current ecological crisis and incalculable animal suffering.

On the right panel is St. Isaac with a lesser known teaching from Mystic Treaties, (Ch.1): ‘Oppression is eradicated by compassion and renunciation.’ Here we are reminded that it is through compassion – and we could add other virtuous behaviours – together with a recognition and renunciation of our sins against ‘all things’ in creation,  that will enable us to rid ourselves and those we are to care for, of all forms of oppression and harmful vested interests.

Both of these teachings are grounded in the Saint’s love and desire to reflect the true image of God.  The icon above reflects just that.

[1]  Aidan Hart Icons  http://www.aidanharticons.com. Aidan’s article will be posted on our website when complete.

[2] Drawn either side of Christ in the centre panel. The discussion on Patristic teachings on Luke 13:15 & 14:5 has been discussed in greater detail in my article in the Greek Orthodox Theological Review,Volume 61 Fall-Winter 2016 Numbers 3-4:125-140.