Having just had a meeting with other animal advocacy/justice groups and hearing/feeling the great compassion in the room, I thought i would add here St. Isaac’s teaching on inclusivity, which extends to all of God’s created beings. This is another key component of an Eastern Orthodox position on animal suffering and sooooo much earlier than St Francis:
“And what is a merciful heart…the burning of the heart unto the whole creation, man, fowls and beasts, demons and whatever exists. So that by the recollection and the sight of them the eyes shed tears on account of the force of mercy which moves the heart by great compassion…Then the heart becomes weak and it is not able to bear hearing or examining injury or any insignificant suffering of anything in creation…And therefore, even in behalf of the irrational beings and the enemies of truth and even in behalf of those who do harm to it, at all time he offers prayers with tears that they may be guarded and strengthened: even in behalf of the kinds of reptiles, on account of his great compassion which is poured out in his heart without measure, after the example of God.”[1]
In this teaching, St. Isaac draws us back to the key point of Image of God – mercy, love and compassion “are after the example of God.”
To ensure the correct translation, I sought advice from the expert on Syriac studies, Dr. Sebastian Brock who confirms that ‘compassionate’ is the closest to the original Syriac meaning.
[1] Isaac, Mystic Treaties, Ch. 1, Homily 7.

Dr Nellist is editing this multi-discipline work, where academics, people of faith and no faith and those working in the public sector or NGOs and Charities, come together to offer perspectives on the most important issues of our time – Climate Change and Care for the Natural World. Expected publication mid-2021.

Trawling for Fish May Unleash as Much Carbon as Air Travel, Study Says

The report also found that strategically conserving some marine areas would not only safeguard imperilled species but sequester vast amounts planet-warming carbon dioxide, too.

Protecting the global ocean for biodiversity, food and climate | Nature

Please see our new Italian page which translates some of our material into Italian by our dear friend Milo Felletti.

ON THE PARDON OF THE “SINFUL” PARROT, CROW-FASTING AND SINCERE PRAYER 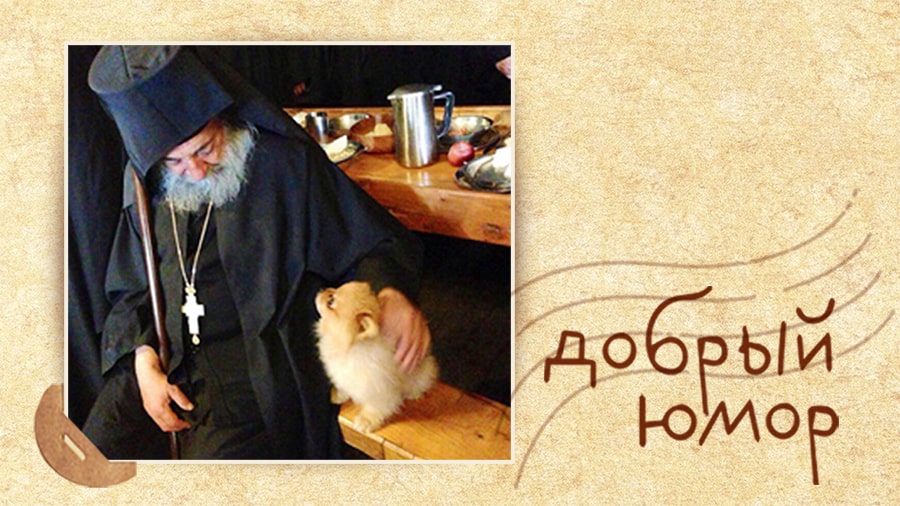 Dear friends! The “Good humor” heading starts on our website. Let the good joke be a consolation and help to keep courage in any situation!

“Gayness is not a sin — it drives away fatigue, and despondency happens from fatigue — and it is not worse …” (St. Seraphim of Sarov)

“There are people among us who do not understand humor and will not envy them … And there are saints who, as we know, had a wonderful sense of humor — the same Rev. Ambrose of Optina. I also talked a lot with Father Nikolai (Guryanov) and saw how he loved to joke and laugh. But everything should be in place. Humor should help both us and our neighbors … Rev. Seraphim of Sarov said that when despondency comes, and is gloomy at heart, a joke helps to get out of this state. Sometimes you have to laugh a little at yourself to break the deadlock. Humor may be present even in the post, but only in moderation and to the place. And, of course, humor should be kind and light … 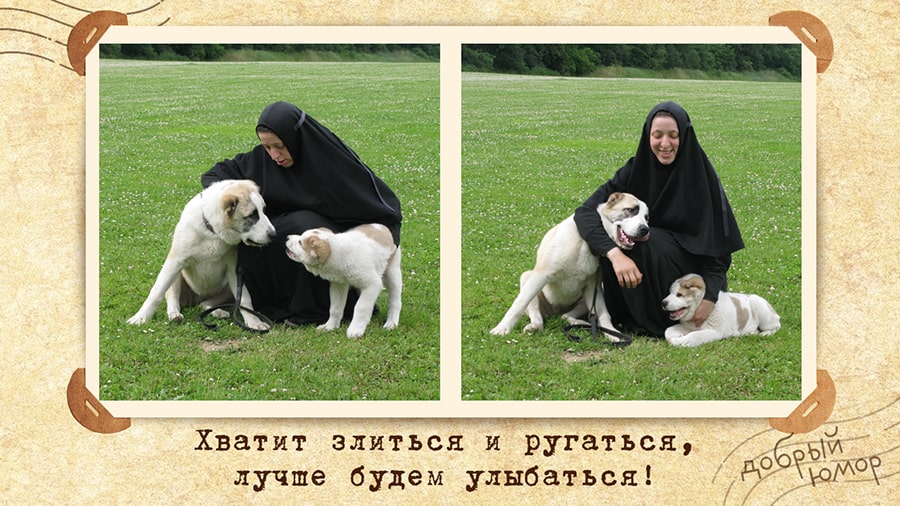 Still, it’s not for nothing that we call animals brothers smaller. They do so often, even in unhappy moments, make us smile!

The Russian commander Skobelev had a parrot for many years. And the tsar’s servant himself often and long earnestly prayed out loud.

Once he was presented with a very expensive book on a military theme, and after another study, he left it open on the table and retired for some time. And when he returned, he almost fainted: the most precious military allowance of a foreign publication was ravaged and torn by a parrot, somehow got out of the cage!

The righteous anger of the royal general knew no bounds. He grabbed a fly swatter and started chasing a naughty parrot with a shout: “I will kill you!”

The guilty bird flew into the closet, from where it was impossible to get it … The General decided to wait for voluntary surrender to bring the culprit to an approximate punishment …

Skobelev’s heart trembled and pricked. He even wept. I screamed behind the cupboard: “Okay, sinner, fly out! You have mercy! ”And after a few moments, the prodigal parrot happily tweeted on his hand …

New Russian law forbids killing & mistreating animals, restricts petting zoos & illegal circuses
We are responsible for those we tame. And it’s now a law in Russia as Vladimir Putin put his signature under new legislation, which bans killing, pitting and other forms of mistreatment of animals.

The Law on Responsible Treatment of Animals prohibits the killing of animals “under any pretext.” It also outlaws shooting or poisoning stray dogs and cats, which has been happening in many Russian cities in recent years. Homeless animals are to be captured, sterilized, vaccinated and released with a special microchip.

Organizing animal fights and hounding beasts at other animals or people has also been made illegal.
The law orders pets to be kept in proper conditions by their masters. It bans contact or petting zoos from being opened at the malls, which is a common thing across Russia, as well as hosting animals at bars and restaurants.

In April, two bears escaped from a café and caused major havoc in Yaroslavl Region. One of the animals was captured, but the other went to the village and had to be shot dead.
The law makes life harder for numerous semi-legal circuses across Russia, which often use dangerous wild animals in their shows. In October, Russia was shocked after a lioness attacked a four-year-old girl during a traveling circus performance in Krasnodar Region. The child survived but suffered lacerated wounds to the face and other injuries.
The wild animals owned in violation of the law and without a proper license will from now be seized by the state. Hosting them at flats, residential homes and country houses has also been banned.The new legislation states that an animal can’t be simply thrown into the street, but “should be passed to a new owner or the shelter.” Camels, ostriches and other exotic creatures have been recently found in the wild in Russia after their disingenuous masters disposed of them.

Dog owners will also face some restrictions as the law obliges them to walk their companions only in specially designated areas. It also allows punishing those, who refuse to pick up feces left by their pets in the street, with fines.
The legislation, aimed at protecting animal rights, was first introduced to the parliament in 2010 and has taken almost eight years to be finalized by the lawmakers.

The Most Rev. Kirill (Smirnov), Metropolitan of Kazan and Sviyazhsk, was sent to exile. He was thrown out of the train going at full speed during one of the nights.

It was a snowy winter. Metropolitan Kirill fell into a huge pile of snow and didn’t get injured. It took him a long time to get out of that pile of snow but when he did, he discovered that he was in a dense snow-covered forest with no sight of human habitation for miles. He had no other option than trying to make his way in the snow for a long time. When he was finally too tired to keep trudging, he sat on a tree stub. Cold wind chilled him to the bone, cutting into his worn-out cassock. The Metropolitan felt that he was about to freeze to death, so he started reading prayers for holy death.

All of a sudden, he noticed something enormously big coming at him. He realized that it was a bear.

“It’s going to eat me,” the Metropolitan thought but he was unable to move, and after all, where could he run? The bear came closer, sniffed at the sitting man, and calmly lay by his feet. The huge bear’s body emanated heat and benevolence. The bear started to roll over and showed the Metropolitan its belly. Then the bear stretched out and started snoring out loud.

The metropolitan hesitated, looking at the sleeping bear, but then, unable to tolerate the frost, he lay near the bear, close to its warm belly. The bear was breathing deeply, blowing hot air into the metropolitan’s face. At dawn, the metropolitan heard roosters at a distance. “There is a human habitation not far from here,” he thought and cautiously rose to his feet so as not to wake up the bear. However, the bear woke up, shook itself off, and ambled towards the woods struttingly. The refreshed metropolitan headed towards the rooster calls and soon reached a tiny hamlet.

From The Elders’ Lives. Parables. Compiled by D. Gritsenko

Almost 100 foxhounds were put down after an outbreak of bovine tuberculosis swept through their dirty, overcrowded and dilapidated hunt kennels.

A kennel worker tested positive for the disease after the outbreak at the Kimblewick Hunt’s headquarters near Aylesbury, Buckinghamshire, an investigation has found.

Researchers from the University of Edinburgh said that the risk of transmission from dogs to humans was “plausible and real”.

Their findings will raise fears that hounds can spread TB to other animals, which farmers have called “the greatest threat” to the dairy industry.

The first infected dog was found in December 2016 and a further 96 of the hunt’s 164 dogs tested positive and had to be destroyed.

Special thanks to Fred for sending through this video and notes on how wolves shape the land, even changing the course of streams and rivers.

See this story of the impact of wolves in Yellowstone National Park. But this is just the beginning of the story.

What biologists noted were a whole cascade of changes. Even the fishing got a lot better – because the elk stayed out of the stream beds, willows grew up alongside the streams, more cover and shade was provided, more insects fell into the stream, therefore a lot more food was available and the trout grew a lot bigger and faster.

See the video and link to it below.

For all those who try to prevent the suffering of others:

We have decided to attend rallies such as this one, against the live transportation of animals, in order to be a silent witness to God’s displeasure at the suffering of animals.

Peter was at the rally and came over to show his support. Natalia Doran was also in attendance and we thank her this photograph. 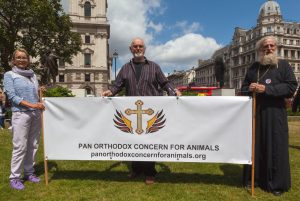