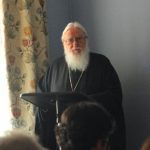 His Excellency Kallistos, Metropolitan  of Diokleia is Patron of Pan-Orthodox Concern for Animals. He is pictured presenting at the Religion and Animal Protection conference in Oxford, 2014.

The Most Reverend Kallistos (Ware), Metropolitan of Diokleia (Born Timothy Ware in Bath, Somerset, England at 1934) is an auxiliary bishop of the Ecumenical Patriarchate in Great Britain.

Metropolitan Kallistos was educated at Westminster School (to which he had won a scholarship) and Magdalen College, Oxford, where he took a Double First in Classics as well as reading Theology.

In 1958, at the age of 24, he embraced the Orthodox Christian faith (having been raised Anglican), traveling subsequently throughout Greece, spending a great deal of time at the Monastery of St. John the Theologian in Patmos.

He also frequented other major centres of Orthodoxy such as Jerusalem and Mount Athos. In 1966, he was ordained to the priesthood and was tonsured as a monk, receiving the name Kallistos.

In the same year, he became a lecturer at Oxford, teaching Eastern Orthodox Studies, a position which he held for 35 years until his retirement. In 1970, he was appointed to a Fellowship at Pembroke College, Oxford, and in 1982, he was consecrated to the episcopacy as an auxiliary bishop with the title Bishop of Diokleia, appointed to serve as the assistant to the bishop of the Ecumenical Patriarchate’s Orthodox Archdiocese of Thyateira and Great Britain. Despite his elevation, Bp Kallistos remained in Oxford and carried on his duties both as the parish priest of the Oxford Greek Orthodox community and as a lecturer at the University.

Met. Kallistos is perhaps best known as the author of the book The Orthodox Church, published when he was a layman in 1963 and subsequently revised several times. More recently, he produced a companion volume, The Orthodox Way. But his most substantial publications have emerged from his translation work. Together with G. E. Palmer and Philip Sherrard), he has undertaken to translate the Philokalia (four volumes of five published to date); and with Mother Mary he produced the Lenten Triodion and Festal Menaion.

He is a prolific writer and in great demand from Orthodox and non-Orthodox organisations. We are blessed to have him as Patron of our group and for his continued support and encouragement.

Metr. Isaias was born in 1971 in Strovolos, Cyprus of parents who had been displaced from their home during the ethnic divisions in Cyprus. He attended and graduated from the Acropolis Lyceum. After his graduation he served in the army of Cyprus before enrolling in the Seminary of Apostle Barnabas in 1990 and, at the same time, joined the Kykkos Monastery as a novice.

In 1992, Isaias began his theological studies at the Moscow Seminary in Russia at the direction of Abbot Nikiforos of Kykkos Monastery, and graduated with Honors in 1997. He continued studies at the Moscow Seminary, completing his post-graduate work with a paper, “The Life and Works of St. Neophtos the Confined”. He then continued his post graduate education at the Theological Faculty of the Aristotle University of Thessalonica, completing a three year program in Ecclesiastical Archaeology. Isaias then returned to Russia as a nominee for Doctor of Theology at the Moscow Theological Academy and Seminary|Moscow Theological Academy]]. After acceptance of his dissertation, “The History and the Theological Content of the Kollyvadiki in Ayion Oros” he was granted, in 2003, the degree of Doctor of Theology by the Council of the Moscow Academy.

In 1993, on a break from the seminary in Russia, Isaias was  ordained a deacon. In 2000, he was ordained priest and elevated to the dignity of archimandrite by Archbishop Chrysostomos 1.

Archim. Isaias was active as a representative of the Monastery of Kykkos. He participated in many theological, cultural, and humanitarian conferences in Cyprus and abroad as a member of the “World Movement of Religions and Cultures.” He also participated in programs in the United States of America on the role of the Church in a modern multicultural society. Serving under Bishop Nikiforos, Isaias supervised, for Kykkos Monastery, the Department of Direct Granting of Humanitarian Help and Spiritual Support of the disabled. This involved visiting and organizing help programs in countries that were affected by wars, hunger, or disasters. Archim. Isaias also served with the blessing of Abp. Chrysostomos I as confessor of non-Cyprian Orthodox prisoners in the Central Prisons.

After election by the clergy and people on June 9, 2007, Archim. Isaias was consecrated and enthroned Metropolitan of Tamassos and Orinis on June 11th, 2007.

During his service us a bishop he founded the first Orthodox Christian environment and animal protection department of the Cyprus church in his diocese.

Fr. Simon Peter Nellist is Archpriest of Tanzania. His Mission Centre is based in Kidamali, a small village on the Iringa plateau some 500 kms south west of Dar es Salaam and 40 kms from Iringa. The mission serves 30+ villages in the area and is primarily child focused, providing a feeding programme, health care, education and clean water. Malnutrition is now rare in the mission area but the feeding programme allows access to check the children’s general health and welfare. Further details can be found on their website – orthodoxtanzania.com. Fr. Simon also serves in Cyprus and England. He is Treasurer of this charity and was a professional accountant in many countries before entering the priesthood.

Dr. Fr. Andreas Andreopoulos studied in Greece, Canada and the UK, obtaining his 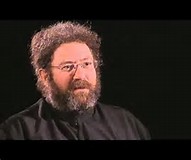 PhD. in Theology and Art at Durham University. Since then, he has worked all over the UK, America and Canada, in addition to delivering conference papers and lectures across the world. Dr Andreopoulos has been at the University of Winchester since 2010 and is Programme Leader for the MTh Orthodox Studies.

Dr Christina Nellist has a PhD in Eastern Orthodox Theology  (early and modern) which relates to animal suffering and human soteriology. She is a retired teacher and coordinator for Science who worked with the governments of  Chile and the Seychelles on animal protection and public health issues. She was the British government’s Warden for the islands of the Seychelles where she helped establish the Orthodox Christian Community and  the SPCA; wrote the first special education programme for children with learning difficulties and sponsored training on the link between animal abuse and interpersonal violence. She is editor of this site and has been given the honour and blessing of Archbishop Gregorios and Met. Kallistos of Diokleia to establish this site.

It gives me great pleasure in announcing that as of the 10th October 2017, our group is now a registered charity – number 1175072.

Our first aim is to create this website to advertise the existence of the group. We do not have ‘membership’ or ‘newsletters’ because in the modern world the use of social media is the most efficient and cost effective way of keeping our friends informed on the many issues involved in the subject of animal suffering. We do however need to raise money to ensure the expansion of the charity and for capacity building, such as the developing of a larger website. All donations will be received with great thanks. Different language pages are being added as we progress. At present we have Greek/Russian/Romanian and hope to include others such as Arabic/Serbian, etc in the future.  We have also added a translate drop-down menu to help disseminate our news. The aim is for all the content to be available to all  Orthodox Christians no matter where they live or which language they speak. We shall also be seeking out those who are willing to translate this material. If you are willing to help us please contact us on panorthodoxconcernforanimals@gmail.com.

We are pleased to announce that by God’s grace, we have volunteers to translate some of the texts into Russian, Greek and Romanian.  We are still looking for volunteers to help them and to translate the articles/announcements into other languages.  This is particularly important for a group such as ours which cuts across the normal national boundaries and is needed because of the poor quality of translation available on the  internet.

We would also like to hear your views and will try to share some of your photographs.

Enormous thanks go to our great friend Lyudmyla Smirnova who is translating some of the English texts into Russian, to Ingrida Hizmo for the Greek and to Anca Lilly for the Romanian.