I have added this article from a post from Prof. Marc Bekoff – short bio below. It is a summary of a more detailed report by 16 well regarded scientists entitled Cambridge Declaration on Consciousness. I have read both and confirm that their findings concur with my own conclusions which is also based upon scientific research in this field.

A thorough summary of what we know shows skeptics ignore solid scientific data.

I have no doubt that numerous nonhuman animals (animals) are conscious beings, and I know I’m not alone in taking this strong and uncompromising position. Whenever I publish something to this effect and write about a new study or review that clearly shows animals are indeed conscious, I often receive emails that go something like, “Gee, isn’t this reinventing the wheel and a total waste of time?” or “We’ve known this for centuries” or “Tell me something we didn’t know.” I couldn’t agree more that the real question at hand is why has consciousness evolved in other animals rather than if it has evolved. And, the position that it is unquestionable that other animals are conscious and sentient beings is not only or merely that of animal activists or pro-animal people. Indeed, the recent Cambridge Declaration on Consciousness signed by 16 well-known scientists, some of whom do or have done invasive research, concluded:

They could also have included fishes, for whom the evidence supporting sentience and consciousness is also compelling. For more discussion of consciousness in fishes please see “It’s Time to Stop Pretending Fishes Don’t Feel Pain” and links therein, as well as Jonathan Balcombe’s excellent summary of research on the cognitive and emotional lives of fishes called What a Fish Knows: The Inner Lives of Our Underwater Cousins and wide-ranging discussions in the journal Animal Sentience in which researchers and other scholars predominantly support the idea that fishes are sentient being. For more discussion of the Cambridge Declaration on Consciousness please see “Scientists Conclude Nonhuman Animals Are Conscious Beings” and for more on nonhuman sentience see “A Universal Declaration on Animal Sentience: No Pretending.” 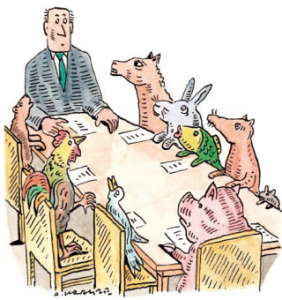 For an essay I wrote for New Scientist magazine called “Animals are conscious and should be treated as such” about the Cambridge Declaration on Consciousness, there is a wonderful cartoon of animals, including a fish, sitting around a table discussing these issues (reprinted here with permission of the artist, Andrezj Krauze). The print copy was called “Welcome to our world,” and it’s about time we did so with open hearts.

“Animal Consciousness”: A comprehensive and current comparative review of what we know about consciousness in other animals

A few days ago I learned about a new and report called “Animal Consciousness” authored by 16 scientists (the complete study and an 8-page summary can be found here under the heading DOCUMENTS). It’s long and detailed, but I figured if they took the time to write it, I could take the time to read through it. I fully realize that many people won’t, so here I just want to summarize some of their findings. This comprehensive report was conducted by INRA, Europe’s top agricultural research institute, upon request of the European Food Safety Authority (EFSA). So, while the authors took a broad comparative view of consciousness in nonhuman animals, there was somewhat of a focus on so-called livestock because of how billions of these sentient beings are routinely and globally abused for human palettes. “Livestock” is a demeaning word I disdain because these are living sentient beings rather than merely “stock.” If anything, they should be called “deadstock.”

Concerning this exceptional report, at INRA’s website we read, “This INRA collective scientific expert report is based on a critical review of international literature on animal consciousness. 659 references selected from the Web of ScienceTM Core Collection (WOS) database were studied by 17 experts, including 10 INRA experts, from different scientific fields (biologists, cognitivists and philosophers). 75% of these publications come from international scientific journals, 33% of which were published after 2010. INRA’s Delegation for Scientific Expertise, Foresight and Advanced Studies (DEPE) coordinated the report.

Here are some snippets from this study to whet your appetite for more.

Caution is required before excluding consciousness in species not having the same brain structures as the mammalian ones as different neuralarchitectures may mediate comparable processes.

Considering the limited amount of data available and the few animal species studied so far, we conclude that different manifestations of consciousness can be observed in animals but that further refinement is still needed to characterize their level and content in each species.

… the overall picture obtained from the large range of species considered strongly provides evidence for different types of consciousness in both livestock and fish.

We provide a few examples of higher levels of consciousness in domestic livestock: in poultry, hens can judge their own state of knowledge suggesting they are conscious of what they know or do not know. Pigs can remember what events they experienced, where, and when. Several other examples of cognitive capacities potentially underlying consciousness in domestic livestock are also available, such as recognition of individuals in sheep and cattle. Collectively these studies and those on wild and laboratory species, clearly support the hypothesis that domestic livestock species are capable of complex conscious processing.

It’s high time to stop pretending we don’t know if other animals are conscious and sentient beings: Bridging the knowledge translation gap

In the INRA report we read, and I quote directly because it is essential to acknowledge what the authors themselves conclude:

It is thus likely that what matters to animals is rather similar to what matters to humans. We believe that human sentience is the capacity to suffer and to feel empathy for the suffering of others, and deserves ethical recognition … Therefore, the same should apply to non-human beings supposed to possess a “sentience-like”. (my emphasis)

The level of respect due to the animals is driven by the understanding of the forms of consciousness accessible to different animal species. Broadly speaking, we can say that the development of the cognitive sciences has resulted in the recognition of cognitive capacities in many species of animals (particularly mammals and some birds), including the capacity to experience a range of mental states and thus the possession of a mental universe much richer than that of mere existence as a sentient being. And yet this scientific development has coincided with the development of contemporary livestock production systems in which animals are, in the view of animal welfare advocates, increasingly treated as mere machines. In laboratory research, animals are likewise treated as though they were nothing but tools. Inquiring into the cognitive capacities and forms of consciousness manifested by various animal species thus results in a tension between a “thing to respect” in animals, which tends to expand, and a human behaviour that in practice respects the animal less and less, at least insofar as the public opinion understands it.

All in all, similar to the Cambridge Declaration on Consciousness and other documents, the INRA report provides conclusive evidence that nonhuman animals are conscious beings and it’s high time to put the debate about whether they really are conscious to permanent sleep.

The important question at hand, then, is what are we going to do with this information? In our book called The Animals’ Agenda: Freedom, Compassion, and Coexistence in the Human Age Jessica Pierce and I wrote about what we call “the knowledge translation gap,” referring to the practice of ignoring tons of science showing that other animals are sentient beings and going ahead and causing intentional harm in human-oriented arenas. On the broad scale, it means that what we now know about animal cognition and emotion has not yet been translated into an evolution in human attitudes and practices.

A sad and inexcusably self-serving example of the knowledge translation gap is found in the wording of the federal Animal Welfare Act (AWA), which explicitly excludes rats and mice from kingdom Animalia (even though a first grader knows that rats and mice are animals). We could also call the AWA’s slip up an “alternative fact.” In the 2002 iteration of the AWA we read:

“Enacted January 23, 2002, Title X, Subtitle D of the Farm Security and Rural Investment Act, changed the definition of ‘animal’ in the Animal Welfare Act, specifically excluding birds, rats of the genus Rattus, and mice of the genus Mus, bred for use in research.”

For more on the idiocy of the AWA’s misclassification of rats, mice, and other animals, please see “The Animal Welfare Act Claims Rats and Mice Are Not Animals.” Where have all the scientists gone who know that rats and mice are animals? Why haven’t they spoken out en masse about this egregious and unscientific move? Most likely, it’s simply because it works for them to ignore it.

I hope that people who are interested in the general topic of animal consciousness will take the time to look at the INRA report. You can do so in different sittings.

All in all, this landmark report is a thorough summary of what we know about animal consciousness and it makes it extremely clear skeptics who say something like, “We really don’t know if animals are conscious” ignore solid science and are dead wrong. It’s time for them to go home and read available scientific studies, end of story.

These individual conscious and sentient nonhuman beings care about what happens to themselves and to family members and friends, and deserve to be treated with dignity and respect for who they are, not what we want them to be. Recall what the authors of the INRA report concluded, namely, “It is thus likely that what matters to animals is rather similar to what matters to humans.” These animals’ lives are valuable because they are alive — they have what is referred to as inherent value — not because of what they can do for us — what is called their instrumental value. It’s about time that we welcome them into our world and the arena of conscious beings

Marc Bekoff, Ph.D., is professor emeritus of Ecology and Evolutionary Biology at the University of Colorado, Boulder, and co-founder with Jane Goodall of Ethologists for the Ethical Treatment of Animals. He has won many awards for his scientific research including the Exemplar Award from the Animal Behavior Society and a Guggenheim Fellowship. Marc has published more than 1000 essays (popular, scientific, and book chapters), 30 books, and has edited three encyclopedias.