Georgie Johnson  @georgiefjohnson.  It is informative with links to other information.

Why does the melting Arctic sea ice matter?

With soaring Arctic temperatures becoming more and more common, we asked leading scientists why it matters if sea ice disappears. Every year, at roughly the same time, the Arctic hits its ‘maximum sea ice’ as the Antarctic reaches its ‘minimum sea ice’. And this year’s event was record-breaking.

In a widely-covered release, the National Snow & Data Center (NSIDC) said the Arctic sea ice on March 7 was “the lowest maximum in the 38-year satellite record.” Meanwhile, just a few days earlier, the Antarctic had a historic amount of sea ice — “the lowest in the satellite record.” The data reinforced what has become a relentlessly frequent observation: polar sea ice is melting at a rapid rate. 2017 was the third straight year in which the Arctic’s sea ice maximum set a new record low — and it had been tracking at consistently record-low conditions for several months before that. Things are, however, less straightforward in the Antarctic.

Ice free?
“It’s been quite extraordinary for several months in the Arctic,” Dr Julienne Stroeve said at a recent media briefing held by the Energy and Climate Intelligence Unit (ECIU) in London. “There is a massive increase in variability happening right now,” said Stroeve, a polar professor at UCL and senior researcher at the NSIDC. She explained: “When you have really thin ice, you could have a very warm summer that melts out a tonne of ice and you get a huge drop. “You could also have a colder summer that keeps a thin layer of ice around. So that variability from year to year starts to increase quite a bit, and we’re actually starting to see that now.” This, she said, is “something you see in climate models as your transition to ice-free Arctic conditions.” “Is this a sign of maybe where we’re headed?” As you’d expect, the likelihood of an ice-free Arctic depends massively on how much carbon dioxide people keep pumping into the atmosphere.Another 1,000 gigatonnes would make it very likely indeed, the latest research suggests. At the moment, global CO2 emissions are roughly 30-40 gigatonnes a year — which suggests we could hit that 1k mark around the middle of the century. 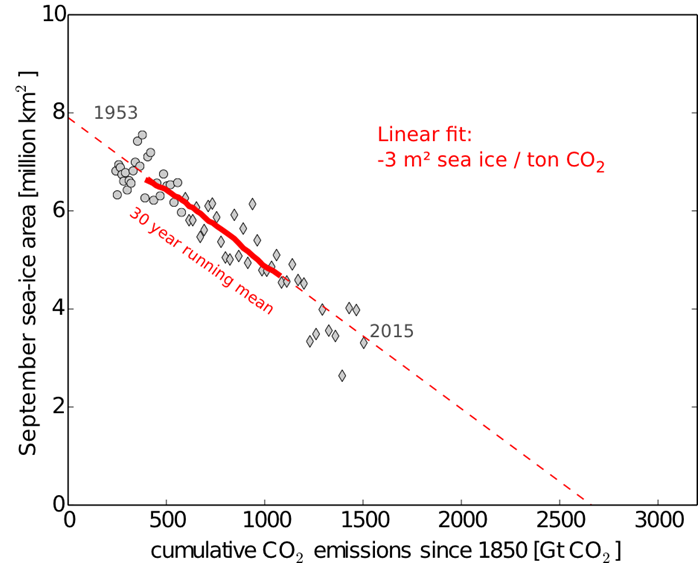 At this point, Dr Emily Shuckburgh, a climate expert from Cambridge University, was keen to stress that the same cannot be said for the other pole. “It’s slightly artificial to lump Antarctic and Arctic sea ice together,” she said. “The processes determining sea ice really are quite different, on a basic level that’s because the Arctic is an ocean surrounded by land while the Antarctic is land surrounded by ocean.” The Antarctic has actually seen a slight overall increase in sea ice over the long-term, a trend which has obscured a lot of regional variability. “There’s a lot of year-to-year variability in the Antarctic. Perhaps even more so than in the Arctic, regional changes matter.” 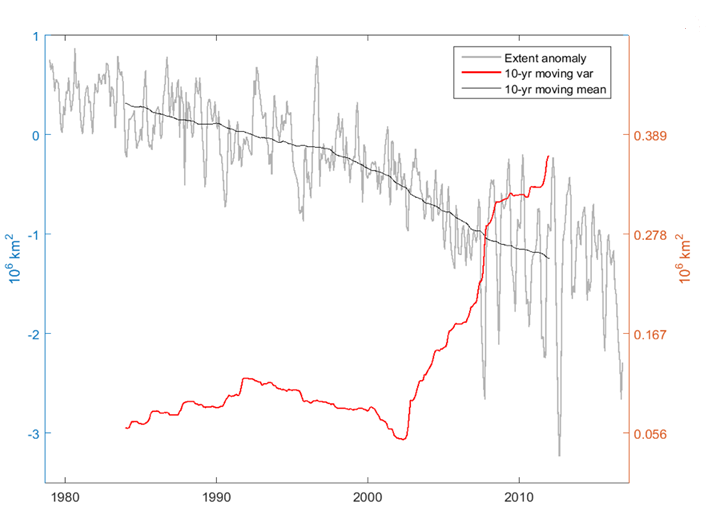 Signifying nothing
All this talk of a possible ice-free Arctic brings us to a column in The Times last year, written by well-known climate sceptic and coalmine owner Matt Ridley. Ridley wrote: “Some time in the next few decades, we may well see the Arctic Ocean without ice in August or September for at least a few weeks, just as it was in the time of our ancestors.“The effect on human welfare, and on animal and plant life, will be small. For all the attention it gets, the reduction in Arctic ice is the most visible, but least harmful, effect of global warming.”

The scientists on the panel were irked by that ‘least harmful’ comment. “These changes do not happen in isolation to the rest of the planet,” said Dr James Screen, senior lecturer at Exeter University. “They certainly can, and very likely are affecting weather and climate thousands of miles to the south, including the UK and North America.”

That’s just the start of it, he said forcefully. “Take that comment to the people living on the north shore of Alaska, where all their homes are falling into the sea because of coastal erosion. “Speak to the polar bear ecologist, who would say this is a habitat issue. There is no way that polar bears can thrive when their habitat is being lost.” Indeed, there is new research that suggests the already at-risk Beluga whale is facing a fresh threat from the melting Arctic, which is deeply disrupting the basis of its food-chain. For a blow by blow of the impact on wildlife and people, check out this Unearthed piece from 2015.

At the heart of the climate crisis is rising sea levels, and the Arctic plays a major role in that. “The warming of the Arctic is exacerbating the melting of the Greenland icecap,” said Screen, “and that’s contributing – I believe – about 1/3 to sea level rise.” “That’s a big chunk of a huge problem for all of us.” Which brings us to the permafrost, which holds more carbon than is currently in the atmosphere.

Recent studies suggest warming in the Arctic – which is happening at twice the rate of the rest of the world – is already impacting permafrost — in northern Canada for instance.