At the Orthodox Mission Conference at Oxford, in the UK,  we learnt of Alexios’ trip to Fr. Themi’s orphanage and of the work of the Tacugama Chimpanzee Santuary.  The sanctuary were supporting not only orphaned/rescued chimpanzees but also the human victims of the recent mudslide.  This is an edited article of his experience.

Scene of the August 14th mudslide.

By going on a tour of the sanctuary I learnt so much from the guides, one of which, Moses, lost 7 members of his family during the August 14th mudslide. The illegal deforestation and house building in the area significantly increased the instability of the soil which led to the devastating mudslide and loss of life.

Essentially, the roots of trees weave into the soil to hold it together and prevent erosion.

Compassion for Humans. The prime objective of the Sanctuary is the rehabilitation of confiscated, orphaned and abandoned chimpanzees. After the recent mudslide the sanctuary initially supported the children left without parents by providing meals. It now sponsors their education but on a long term basis. Chatting to a woman at the airport, I found out that she works 7 days a week and earns $70 per month. She is a single mother supporting her 1 year old child, mother and cousin. Her cousin’s education, including books and uniform is $150 per year. So you can imagine the financial strain this must be putting on the Tacugama Chimpanzee Sanctuary.

Compassion for Non-Humans. The orphaned chimpanzees problem started with the demand for bush meat. Adult chimps are killed for meat and the baby chimps are taken as an extra item to sell. 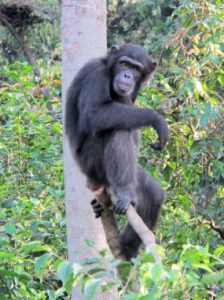 Despite the decrease in the price of bush meat, the price and demand for baby chimps has increased making them more valuable than the adults. Chimps are extremely protective of their young, so a hunter might have to kill at least 6 adults in order to capture one child. Chimps are now listed as endangered by the International Union for Conservation of Nature and Natural Resources (IUCN).

Chimpanzees (and many other species) are recognised by the scientific community as sentient creatures. They are highly intelligent beings who share the same range of emotions as humans; which includes suffering from mental trauma and grief at the loss of family members. A trained member of staff acts as a surrogate mother to these orphaned chimps. 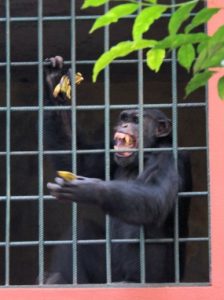 The chimps’ rehabilitation begins with 90 day quarantine. This is to prevent any diseases being spread amongst the group. This period is also used to introduce them to their new diet and home. Medical data is also collated and the chimps are immunised against diseases such as tetanus and polio.

Sharing 98.6% of our DNA, chimps are susceptible to any common ailments that we might have. Once the vet gives the all clear, the chimps are introduced to other members of their new ‘family’. Younger chimps find it easier to fit it and adapt with their new siblings. The role of the surrogate mother gradually decreases at this stage. 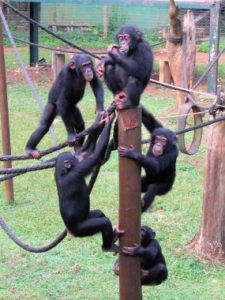 Orphaned chimps socialising through play in the sanctuary

.Tacugama Chimpanzee Sanctuary is located in the Western Area Peninsula National Park by the Regent area of Freetown, S.L.

The sanctuary has several eco-lodges for an overnight stay. It can provide meals and breakfast. The isolation is perfect for anyone wishing to escape the hustle and bustle of Freetown, down below. I managed to record the sounds of the night and early morning whilst I slept. This will be used during the presentation of my photos. For more information on the work of the Sanctuary please visit their website:

The Congo Dam is situated 100 metres up the mountain from the Tacugama Chimpanzee Sanctuary. Their tours usually need to be pre-booked and follow a specific route used by tourists. I was taken on the unofficial tour with a running commentary from my two guides. They spoke of the importance of conservation in the rainforest and the importance of all animals. Deforestation and poachers are the main areas of concern.

The older of the two men,  Sa,

was very knowledgeable when it came to the wildlife

The view from the Congo Dam

The lesson they gave me was worthy of any secondary/high school class. Both men spoke of their job with passion and pride.